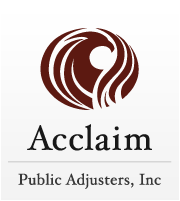 There are no reviews of
Acclaim Public Adjusters.
Be the first to ⭐ Write a Review.

Specialties: we are an adjustng firm that deal with residential and commercial property damage insurance claims. from fires,plumbing, vandalism, mold and more. remember insurance have their representation looking at their bottom line you… More

Our adjusters will execute all kinds of claims ranging from roof damage, denied claims, flooding, broken pipes or plumbing all across the South Florida such as Miami-Dade county, Fort Lauderdale, Palm Beach and Boca Raton. With a public adjusting company dedicated to you, rest easy in knowing we have experience in handling all types of claims. More

Florida Public Adjusting serves all counties in Florida. Our public adjusters are licensed and bonded by the state of Florida, and trained to handle all insurance claims processes. More